A young man sees a girl on the train and in a moment of mad infatuation, follows her. Thus begins a night of wandering through New York City as he pursues‚ÄĒwhat he‚Äôs unfortunate enough to think might be‚ÄĒthe girl of his dreams.

They talk and walk as the young man tries to win her over. Brief triumphs of connection are followed by crashing disasters. The girl constantly throws red flags at him while he tries to pretend he doesn‚Äôt see them. They argue, make gestures of peace, get lost, fight again, reconcile tentatively, go bicycle riding and engage in public indecency. When they are finally alone inside together, the girl reveals she‚Äôs not as free as she seems.

Free Spirit is an ode to the possibility of a summer evening. Inspired by early Woody Allen and the French New Wave, it is about the mirage of what we think we want and how narrow a window of time we have to realize we could love somebody. Free Spirit is a film for anyone who has ever seen a stranger on the train and wondered: could they be...?

Plays with the short film How Does it Start. 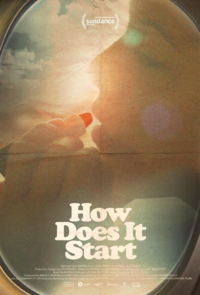 How Does It Start

US | 2019 | 16 min | Amber Sealey
It's 1983 and 12-year-old Rain wants sex, the only problem is she has no idea what that means. With her self-absorbed parents distracted by their recent divorce, Rain is left alone to navigate the complexities of love and adulthood, and learns to do it her own way.